The Embassy of Nepal in Beijing organized a special programme today to celebrate Constitution Day/ National Day of Nepal, 2079 in the Embassy Premises. H. E. Mr. Deng Li, Vice-Minister of Foreign Affairs of the People’s Republic of China graced the event as Chief Guest. The event commenced with the national anthems of Nepal and People’s Republic of China and lighting lamps in the Panas.

Welcoming the guests, H. E. Mr. Bishnu Pukar Shrestha shed light on the historical significance of the Constitution Day for the consolidation and institutionalization of democratic system in Nepal. He stated that Nepal’s Constitution has internalized the values of people’s sovereign right, right to autonomy and self-rule while maintaining freedom, sovereignty, territorial integrity, national unity, independence and dignity of Nepal. H.E. Mr. Shrestha also highlighted the main features of the Constitution.

In his remarks, Ambassador Shrestha stated that Nepal and China have been enjoying the cordial, deep-rooted and multi-faceted cooperative relations based on five principles of Panchasheel, mutual trust and understanding ever since the establishment of diplomatic relations on 1 August 1955. He also highlighted the importance of frequent high-level visits at various levels from both sides for further consolidating the mutual trust and understanding between the two countries.

H.E. Mr. Shrestha appreciated China for its huge contribution for the socio-economic development of Nepal. He thanked the Government of China for providing vaccines, medical equipment and vital supplies to help Nepal fight against COVID-19 pandemic. As Nepal and China are working together for the implementation of Multidimensional Trans-Himalayan Connectivity Network under Belt and Road Initiative, H.E. Mr. Shrestha expressed hope for the early commencement of feasibility study of railway connectivity in the forthcoming days.

In the ceremony, Ambassador Shrestha also informed about natural beauty and tourist attractions of Nepal. Assuring that Nepal is safe, sound and open, he encouraged the guests to visit Nepal as well as help promote tourism of tourism.

He expressed his gratitude to the Chief Guest and all distinguished guests for their valuable presence in the ceremony. The event was attended by Ambassadors from various countries including Ambassadors of the United States of America, Japan, Republic of Korea, Pakistan, Sri Lanka, Indonesia, Cambodia, Lebanon, Iran, among others, CDA a.i.s and diplomats from diplomatic missions in Beijing, representatives from think tanks, Chinese government officials, Chinese and Nepali entrepreneurs, professionals, representatives of Nepali community in Beijing, media persons and the Embassy family. Approximately 265 guests were present in the event. A buffet dinner was served to the guests in the end of the programme.

Earlier today, H.E. Mr. Bishnu Pukar Shrestha hoisted Nepal’s flag in the Embassy premises. All the diplomats and local staff were present on the occasion. To mark the Constitution Day/National Day, the Embassy observed Deepawali in the evening of 18 and 19 September 2022, which will also be followed on 20th September 2022. The Embassy premises have been decorated with promotional pictures featuring geography, nature, culture, art and tradition of Nepal. 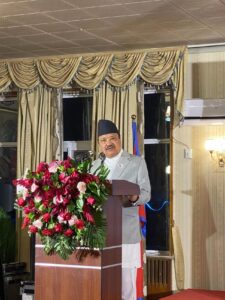 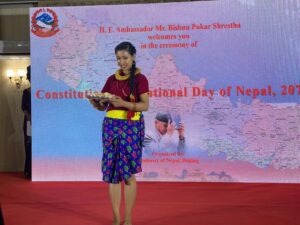 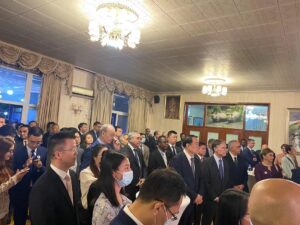