The Republic Day of Nepal was celebrated amid a function held at the Embassy of Nepal in Beijing today.

In his remarks, Ambassador Leela Mani Paudyal extended his warm greetings and best wishes to the Nepali community on the occasion of Republic Day, and said that the people of Nepal had achieved their long-cherished aspirations for becoming fully sovereign citizens under a republican system of governance on this historic day eleven years ago.

On the occasion, floral tributes were paid to the immortal martyrs who sacrificed their lives for the cause of democracy, freedom and people’s rights.

In his felicitatory remarks, Ambassador Paudyal expressed his happiness over the opportunity to greet and felicitate the Summiteers on the occasion of International Sagarmatha/Qomolongma Day, which also coincides this year with the celebration of the Republic Day. Stating that Mt. Sagarmatha/Qomolongma is an eternal symbol of the everlasting friendship between Nepal and China, Ambassador Paudyal said that the Summiteers deserve special recognition and appreciation for their valuable contributions in deepening people-to-people relations between the two countries.

On the occasion, Ambassador Paudyal handed over Certificates of Appreciation to the Summiteers present at the program. The Summiteers who were felicitated today were: Mr. Sun Yiquan, Mr. Song Qiang, Mr. Ma Jianguo, Mr. Wang Xuefeng, Mr. He Yulong and Mr. Lu Haichuan. 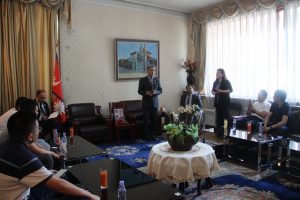 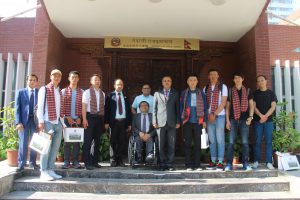